Comical as it may sound, the above paragraph bears much meaning in the world of SCCM software update compliance reporting and bridging the gap between compliance, non-compliance, and the UNKNOWN.

If I have to lay down a marker on the compliance state that bears much risk; I’d put my money on the UNKNOWN more so than the non-compliant. ‘a bottle of poison without the label POISON is more dangerous than a bottle with a label that reads POISON.’

We have created a report that would identify patterns of non-compliance for each month.

The server report will look similar to the image on the left.

Before we dive deep into the process of setting up the report, let me explain a few of the report parameters.

Year: The report server displays the current year by default. You can choose a different year and click the ‘View Report’ button to see the compliance for the selected year. You can add more years to the drop down by editing the report.

Target collection: ‘All Systems‘ and collections starting with ‘report-server-‘  (for server report) and  ‘report-workstation-‘  (for workstation report) are displayed in the drop-down menu. But again, this can be changed by editing the report.

System name: The name of the device you would like to query. Use ‘*’ as a wildcard character.

Last scan time: Choosing a date here would limit the result to only the devices that had the final compliance status date/time older than the selected date.

All of the other parameters let you filter the report based on compliance responses for every month. For example, show entries that are compliant for January but not compliant for March.

Let me bring your focus temporarily to the blocks of GREEN, GRAY, and RED. I like to explain the meaning behind the colors and the patterns of colors.

GREEN – Device has a known status and is compliant with a value of 1.

GRAY – Device has an unknown status and is not compliant with a value of 0.

RED – Device has a known status and is not compliant with a value of 0.

Devices that are displaying consecutive GRAY or RED would need attention. Let me emphasize it again; look for patterns.

Below are some of the prerequisites.

Most of the below Active Directory user attributes are used by the ‘Workstation’ report.

Note: For the report to work, at least one AD user object in your AD schema should have all of the above attributes and their values set; the database tables for these attributes are not otherwise created in the SCCM database. While grappling with software update compliance, it is best practice to have the user information handily available in the report, so it is best practice to have this information in AD. Run a Full discovery after adding new attributes. 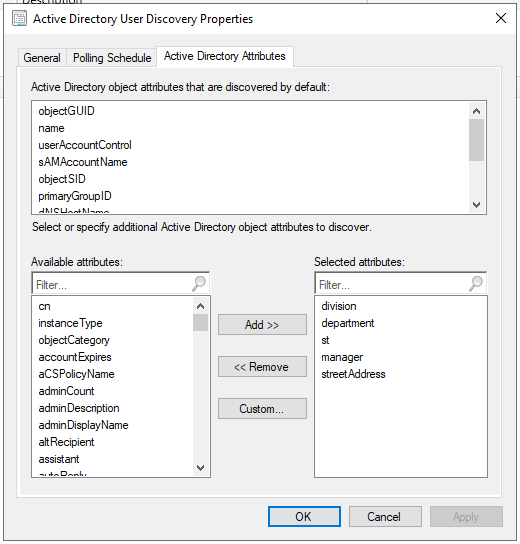 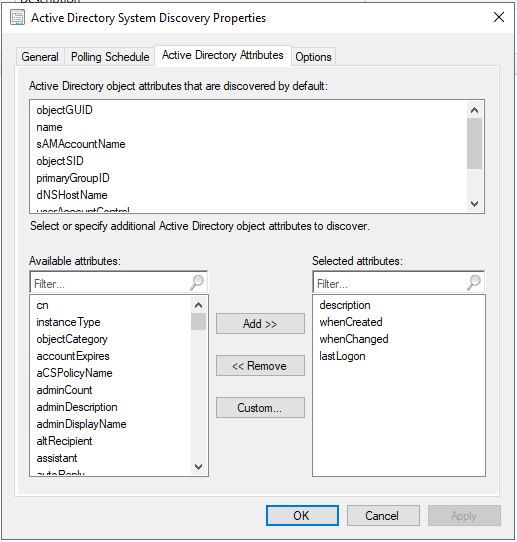 If for a particular Device a few attributes are not available, the report would show a NULL value. While grappling with software update compliance, it is best practice to have device information handily available in the report. Run a Full discovery after adding new attributes.

The whenChanged and whenCreated AD attributes are not available in SCCM and thus not discovered by default from Active Directory.

Create ‘Custom’ entries under ‘Active Directory System Discovery’ in the SCCM console for the whenChanged and the whenCreated Active directory attributes. Run a Full discovery after adding new attributes. 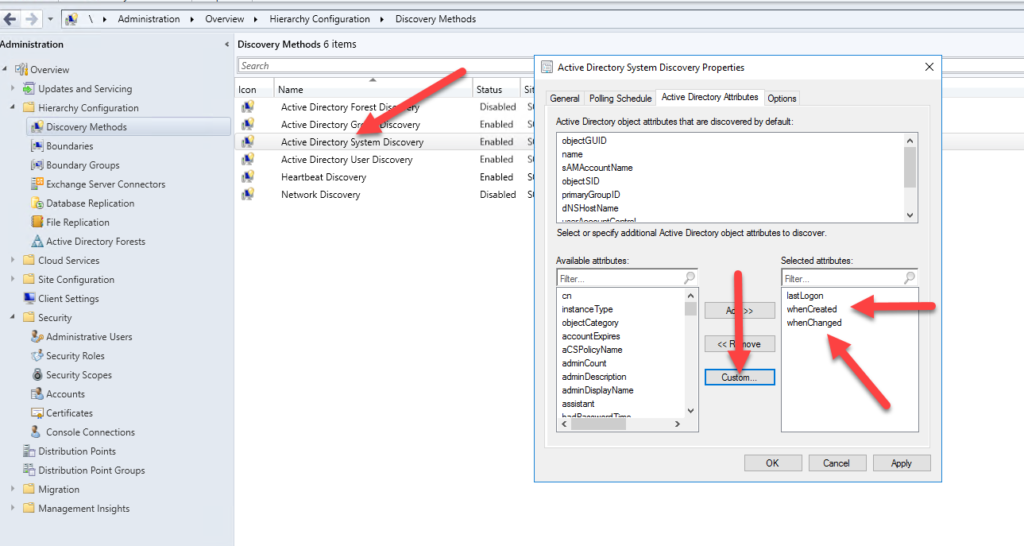 Devices manufactured by Lenovo have a unique string set for their ‘Model’ attribute in WMI. This string is not descriptive. For Lenovo devices, the Extended computer system WMI class has a more human-readable value. If not already, add an extra class to your Hardware Inventory. 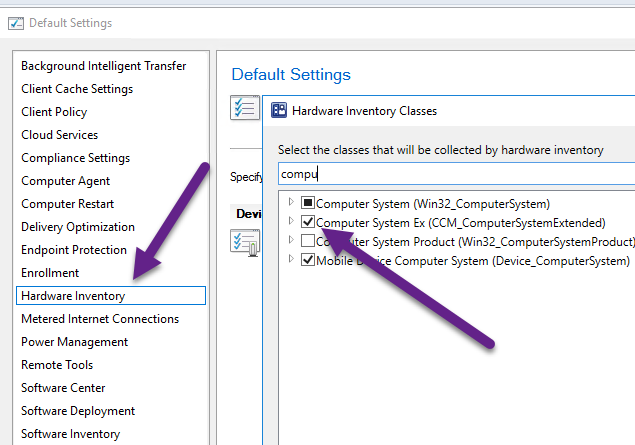 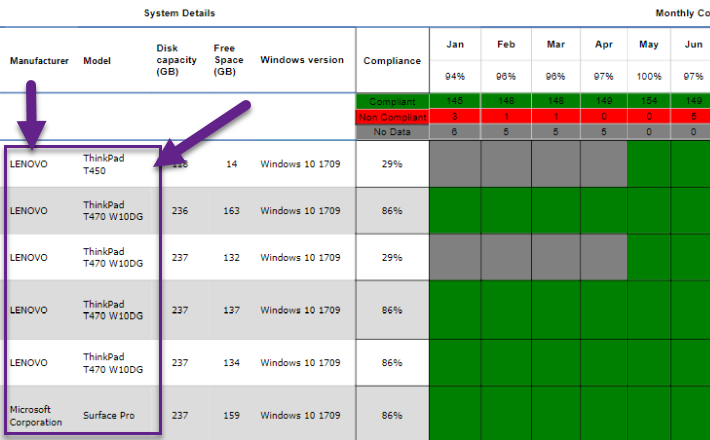 Okay, now that we’ve met the prerequisites, its time to move into the building blocks of the report.

The report contains the following components.

The naming convention for the configuration baselines would take the below format.

Add all the updates that were deployed to your workstation and Server fleet for that month. This also includes your Office365 updates. 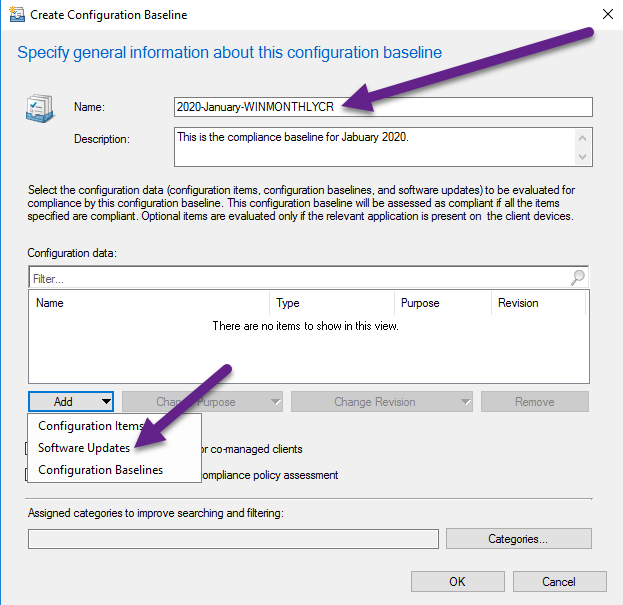 The below PowerShell script automates the following. 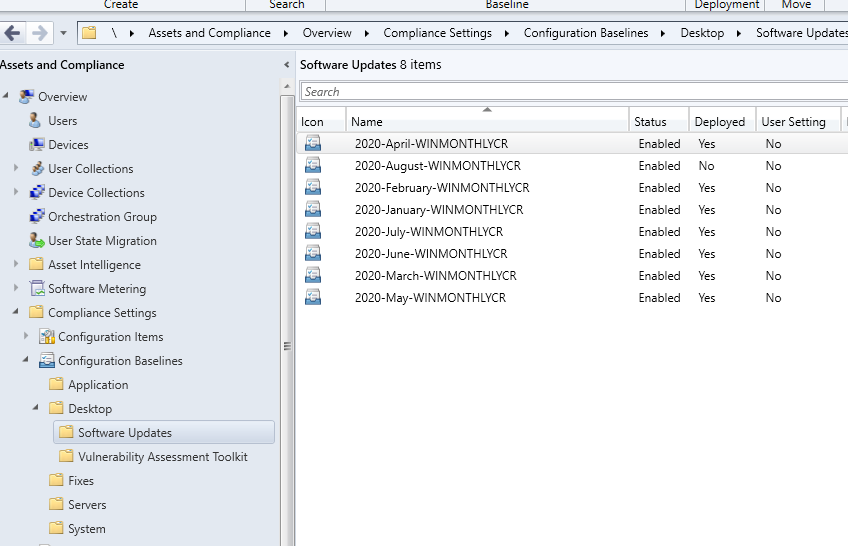 Download the RDL file and import it into your preferred SSRS report location. Change the data source to that of your organization.

[For workstation report only] If ‘C:‘ is not the SYSTEM drive, change the hidden parameter ‘sysdrive‘ that is set within the report. You could either use the above method or use the ‘Report Builder’ application to change parameter default values. 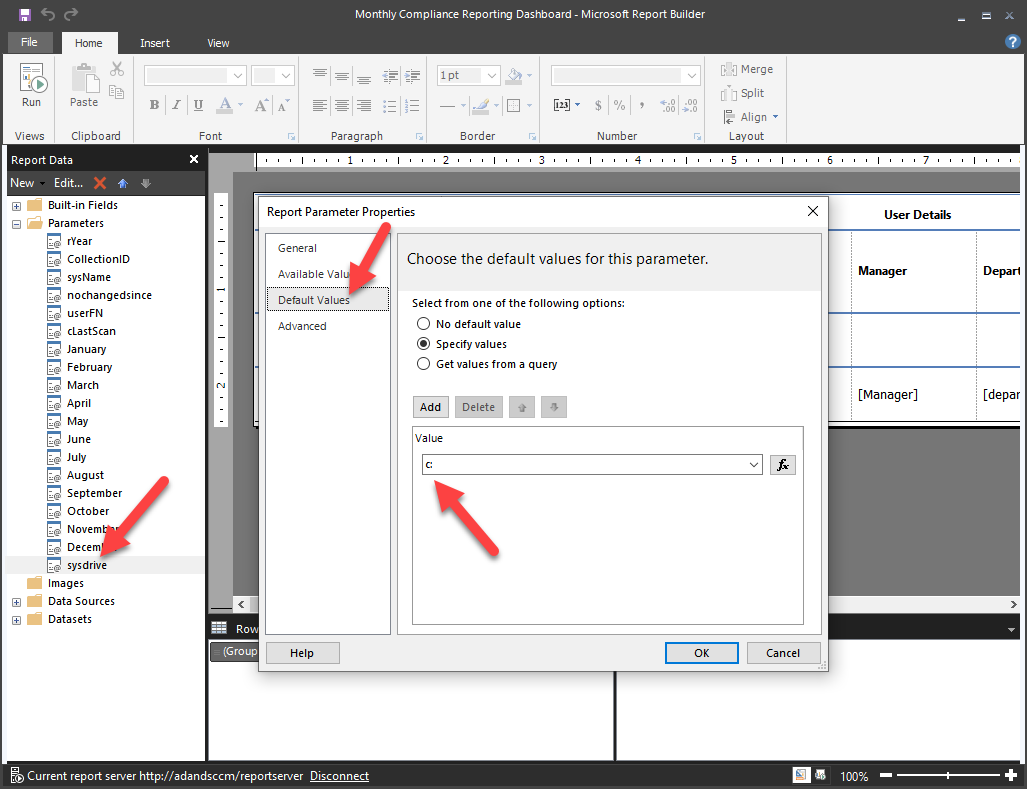 You have to set the report ‘datasource‘ to that of your organization. This can either be done using SSRS ‘report builder‘ or by going to the report URL.

In addition to the above action, verify if you have select permissions to all the ‘SQL Views’ referenced in the report (Only if you see errors). 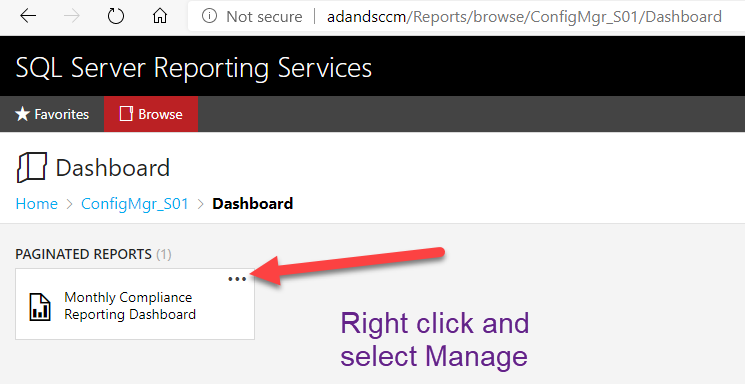 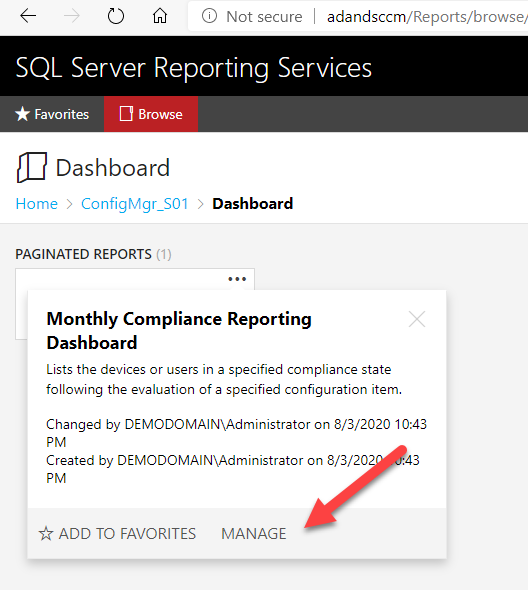 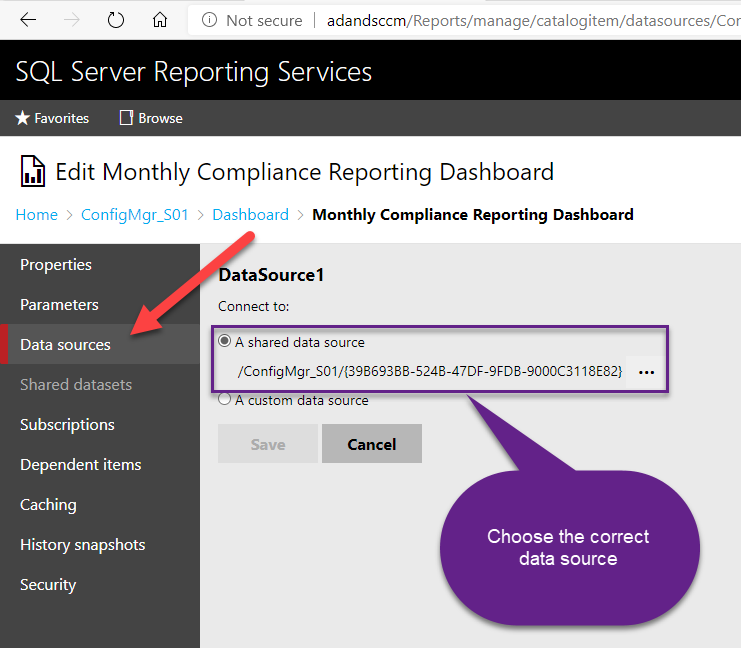 How does this report help increase software update compliance?

After you configure the necessary parameters and deploy all the configuration baselines start looking for patterns in the report. The following are some of the patterns to analyze.

Assumption: The current Month is July 2020.

An all GRAY line, 2 or more GRAY blocks in a line: Such a pattern shows that the device has not received the configuration baseline, the machine does not have a working SCCM client, or the machine has not been online. DNS issues and other WMI issues could also lead to consecutive GRAY blocks.

After deploying the configuration baselines and gathering data from all devices, you’ll find that the Compliant, Non-compliant, No Data figures would be similar to previous months. You’ll also find non-compliance based on geography or device models, or business units.

For the environment represented by the image on the right, the maximum compliance that can can achieved (With the current client health state) is on average 90%. The Compliant, Non Compliant and No Data numbers are more or less consistent too.